VOICES AT THE BIENNALE OF SYDNEY

Mapping Mother Earth and its veins and arteries hacking current traditional GPS methodologies to unveil the hidden, the unthinkable, the utopistic.

Vilcabamba, de Iura Fluminis et Terrae consists of a music piece, developed and performed on the basis of a score created by a computer / digital algorithm. The algorithm is fed with sound data retrieved onsite along the Vilcabamba river, that interfaces with frequencies generated by the sonification of GPS coordinates of rivers with legal personhood, or whose rights are recognized, and other ecosystems that have been brought to the judgement of the International Tribunal on the Rights of Nature.

Hacking traditional tools of cartography and mapping can contribute to unveil the various possible representations of space or of an ecosystem. thereby contributing to unleash a potential for transformative imagination and practice.  In this context indigenous peoples recur to the critical use of GPS coordinates and cartography to challenge the dominant colonial-settler use and vision of land and territories and mainstream their cosmology, traditional knowledge, and livelihoods. As Nato Thompson and Trevor Paglen put it, such sort of experimental geography “offers new poetics of spatial representation to contest the positivist epistemology of mapping”. Similarly, GPS coordinates can be “hacked” and transformed into a possible tool to bring to light, visualize and sonify the complex web of rivers and other ecosystems with legal personhood or whose rights have been recognized and at the same time chart ongoing struggles for the recognition of the rights of Nature. Alternatives to human colonization of Nature therefore arise, by unveiling the invisible borders between humans and the living and enable the voice of those ecosystems to be heard.

Devising the sound of the river as a acoustic ecosystem

Physical environments have their own acoustical fingerprints in a tumultuous state, whereas natural soundscapes lay out a specific acoustic environment within which the different acoustic elements go together. The question arises as to whether its acoustic constituents may be identified and discretized in a musical context.
After listening to a recorded soundscape of the Vilcabamba river, I developed and adapted a set of software tools for inferring the acoustic organization taking place in the river’s Soundscape, on the basis of multidimensional audio featuring. 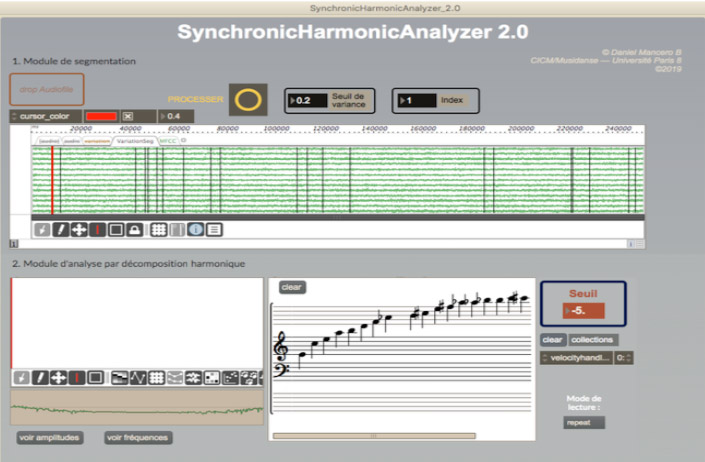 By imposing a threshold for amplitude peaks, it enables to implement the task of audio segmentation and harmonic transcription, by which the acoustic environment can be modeled and transliterated. This device provides a fruitful strategy for delving into its sonic environment.
The compositional process has been undertaken in compliance with a aesthetic wish to pay heed to the harmonic system deriving from the analysis, all the more so each group of notes originates from a specific moment (index) of the analysis. 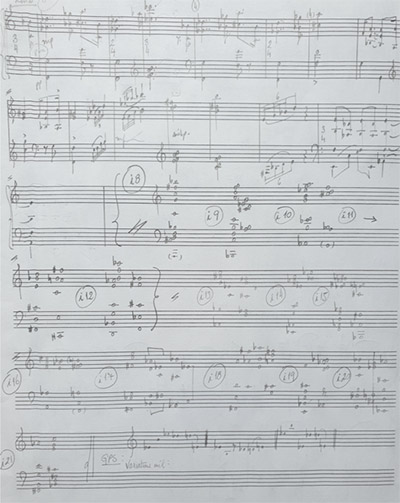 Likewise, GPS coordinates have been integrated into the composing process in order to browse and explore the harmonic system as a means of designating a particular order for frequencies to appear.

Bio.
Composer, jazz pianist and researcher in computer music. Born in Ecuador in 1983, Mancero started playing piano accidentally when he was thirteen. He attended the Mozart Conservatory of Music, and later the Berklee International Network at USFQ University, in Quito, where he started teaching at age 19. Some of his early projects are Rarefacción (Festival Internacional de Jazz de la Habana 2008), Mancero Trío (Festival Iberoamericano de Montevideo, 2013) and Mancero Solo (Jazz à Vienne Festival, France 2013). As a composer, he has participated in many projects ranging from classical traditional Ecuadorian music to contemporary electroacoustic music. He obtained his Ph.D in Aesthetics, Sciences and Technologies of Arts from the Université Paris VIII in 2019, where he developed a series of experimental works on computer science and composition. His latest record “Palíndromo” has been released in 2020. www.danielmancero.com

Voices of Guardians of Mother Earth

Manari Ushigua is a traditional healer and leader of the Sapara Nation in the Ecuadorian Amazon. The Sápara Nation is recognized by UNESCO as an “Intangible Cultural Heritage of Humanity.” Manari has  been a key figure in the indigenous movement of Ecuador as the Vice President of CONAIE (The National Indigenous Organization of Ecuador) from 2013-2016, and as the President of the Sapara Indigenous Federation from 1999 to 2012. Manari has participated in international events, like COP21 UN Climate Summit and the UN Universal Periodic Review of human rights, raising awareness about the threat to his homeland. As a defender of indigenous rights, he has managed to conserve more than 276,000 hectares of primary forest threatened by extractive industries. Manari is the co-founder of the Naku Center, creating a new economic model in the Amazon that is based around cultural and forest preservation.

Notwithstanding rivers’ fundamental importance for social and natural well-being, around the world, mega-damming, pollution, and multiple forms of domesticating are putting riverine systems under great stress. Historically, conquering nature and (at once) ordering society through mega-infrastructure, among others, has been a main response to water scarcity, quality, and flood risk problems. River communities, civil organizations, activists, and social movements develop new ideas and practices of river co-governance and (re)claim river commons. In this context, Riverhood (ERC-funded [no.101002921]) and River Commons are both 5-year research projects that focus on enlivening rivers and study, support and strengthen river co-governance and new water justice movements. They aim to learn from local experiences in Africa, Asia, Latin America, and Europe and build new conceptual and methodological tools for research, education, and stakeholder interaction. The projects share a framework that seeks to comprehend rivers in their multi-dimensionality: as ecosociety, as territory, as subject, as movement.

Norie Huddle, is a US-born peace and environmental activist that lives in Vilcabamba with her husband Richard. Both have been the claimants in the case on the rights of the Vilcabamba river. The river flows in the immediate proximity of their “finca” and its course had been deviated by the debris produced in a road enlargement project. Norie and Richard decided to recur to the Ecuadorean constitution provision recognising the rights of Nature to seek restoration and protect the river as a living entity. This was the world’s first successful legal case on the rights of Nature.